The Mysterious Case of the Missing Coffee

I never expected this saga would continue beyond last night.  I thought one expletive-filled rant would diffuse my rage enough that I could drive to the store and replace the coffee I had given up for lost.  By the time I woke up this morning, it was behind me.

Then I found the pin.

I'm not sure what to make of all this.  In the movies, this sort of subtle 'clue' usually foreshadows ghostly terrors to come.  The thing is, I don't believe in ghosts.  At least I don't think I do.  Like anyone, I've had some spooky encounters in my life, but nothing that would ever make me believe definitively in paranormal activity.  I'm much more likely to suspect someone is messing with me.  I doubt that is the case this time.

As I amply illustrated in my previous post, I have over years become a certified caffeine addict.  So, like the millions of other caffaholics in the world, the first thing I do in the morning is gravitate zombie-like to the coffee maker.  This morning being no different, I brewed a pot and then opened the fridge in search of some breakfast.  Well, wouldn't you know it, there's the vanished coffee from last night, in the spot in the door normally reserved for butter: 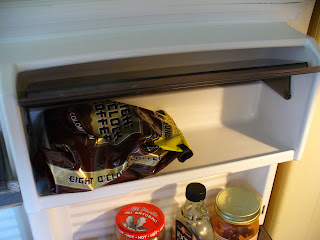 This in itself is nothing strange.  I keep the coffee in a cupboard, but certainly could have, in my absent-mindedness, stuck it in the fridge the last time I used it.  The thing is: I looked there last night.  I looked everywhere.  I was, after all, desperate.

But whatever.  I grabbed the bag and was about to shut the fridge when I spotted this lying on the bottom shelf: 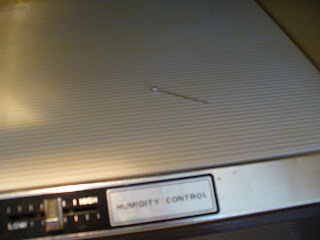 Now what the hell?  A pearl-headed pin?  I'm fairly certain that this object came from the sewing kit that belonged to Alex's late grandmother.  I'm absolutely certain that the pin wasn't in the fridge last night.

Normally, I would have appealed to my wife.  She's the only one who uses that sewing kit, which is kept in the hall closet.  It seems unlikely that she would leave a pin in the fridge, but these things happen.  The only snag there is, Alex has been at a conference in Louisville, Kentucky since Wednesday.  I'm all alone here, and I've been in the fridge at least a dozen times since she left.

I have no good explanation as to why these two items mysteriously appeared in a refrigerator that I scoured last night in a fruitless hunt for coffee.  Either there is some sort of supernatural activity going on--Alex's grandmother leaving a message, perhaps, or a former resident of the house having a bit of fun?--or I'm as blind as a bat.

I'm at a loss.  What do you think, McBoners?

nwb
Posted by BillBow Baggins at 11:59 AM

I love a good ghost story. You could certainly explain the coffee, but the pin? That's supernatural.

Yes, the pin. A message perhaps, from BEYOND THE GRAVE?

I think you had 1 too many martini's at my dad's house and how you're experiencing hallucinations.

Maybe 100 dollar bills are hard to come across even for ghosts.

The problem is I didn't have enough gin at your dad's.

When I was in Gettysburg last summer with a friend I swear her dead grandma was in the room with us at the hotel.

Not really helpful, but I wanted to tell a dead grandma story.