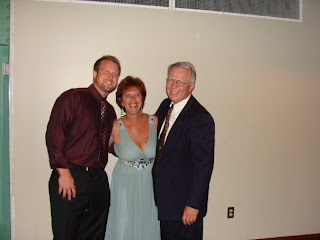 Someone very important in my life is going to be having a very signficant and serious surgery next Monday.  Triple bypass or apparently now it may end up be quadruple bypass heart surgery.  I am going to be sending every ounce of positive evergy I have to him and to his family over the next few days. I ask that you all do that same.

FAMILY.  That is the key word.  Because the Flanagans are a part of my family.  Maybe I am not connected by blood, but that has absolutely nothing to do with the relationship that we have with one another.

Ryan - AKA Ry-Guy, Flanny, Ballz, etc. etc. (I could write a four page post on just his nicknames) - My brother and comrade through good times and bad.  This guy is simply one the best people on Earth.  I will always be there to support him in everything that he does, even if that means living 3,000 miles away.  He has such a big heart which he gets from both his parents, he is a loyal and devoted friend, and there is literally never a time when we're together that we aren't having fun.  I love this guy and I am very thankful to have him in my life.

Denise Flanagan, AKA Aunt Dee, Mama, Mama Dee, and I'm finding out from her friends at The Bay she has about as many nicknames as Ryan.  Aunt Dee is one of the most unique and caring mothers I have ever met.  So much so that she has looked after about 25 of us since we were 12 years old.  "Looking after" of course sometimes translated to yelling, grounding us, scolding us, and most recently dancing with us at weddings.  Regardless the circumstance she was and is always there to make sure her boys are ok.  She lives with an unwavering spirit and energy that I can still have throughout the rest of my life.  Aunt Dee is unafraid to be herself every step of the way, and makes no apologies about who she is and what she is about.  This is one of my favorite things about her.

Now on to Dr. Pat.  There is absolutely no coincidence that there is so much good in Ryan, because all you need to do is have one conversation with his father and you see where so much of it came from.  Dr. Pat has always been such a stoic, strong and compassionate figure in my life.  He is an amazingly talented Doctor who worked his ass off for many years to support his family.  However, he always found time to be involved in everything that was going in our lives, especially our sporting events.  No matter how old we were Dr. Pat would be there, camera in hand, taking pictures of us at our proudest moments.  I still have this framed collage that he made of me playing traveling baseball when I was 12 or 13 years old.  Those pictures mean so much to me as those were some of my favorite moments, and I spent them with so many people who are so important to me.

Dr. Pat - You are an amazing person and have been a tremendous influence in my life. We are all there for you with strength and love.   I look forward to you being there to take pictures of me when I'm sworn in as the official Mayor of Cleveland.

The Case Against Obama (Yes, You Read That Right)

Last week I used some space to make a not-so-subtle plea to our Resident Aquarist to vote Obama.  Understand that he's no Republican, but he is, to put it mildly, disillusioned with the President.  So I, and several of our friends, attempted to work him over from the "lesser of two evils angle."  See, our aquarist lives in Ohio, where Romney and Obama have more or less established permanent residences.  He was unmoved.  His reasons why* bear repeating.  I maintain that a "not Romney" vote is a good one, but I find myself agreeing with much of what is written below, and look forward to the day that we toss out this worm-ridden 2 party system of ours.

I've thought long and hard about it and I will not be voting for Obama.  At what point is "the lesser evil" so repugnant that it can't be supported?  For me it breaks down to several actions Obama took in both international and domestic policy.


1. The Drone Strikes.  So far, the US has launched close to 400 drone strikes in Yemen, Somalia, and Pakistan that have killed an estimated 3500 people, give or take a few hundred.  Drone strikes are notoriously inaccurate, and some stats I've seen talk about a 1 successful kill to 49 innocents killed ratio.  That's not a good thing especially considering we are not at war with Yemen, we are not at war with Somalia, and we are not at war with Pakistan.  I haven't even brought up his strikes in Libya, which were not only done without Congressional approval, but done in the face of Congressional disapproval.  I believe these conflicts were an unconstitutional overreach by the President and if so, this makes him a historic-level mass murderer.

2. Disposition Matrix.  Let's call a spade a spade.  This is Obama's personal kill list that contains women, children, and U.S. citizens that he is attempting to codify to make it a permanent fixture in our foreign policy arena. Normally when military action seemingly goes awry you can make an argument that the President didn't have direct involvement.  That is not true in this case.  Obama personally approves every target on the list.  I have serious problems with summary executions being carried out without due process.  Can you imagine if this was Dick Cheney and not Obama with a personal kill list? (does it matter whose list it is?)

3. Lack of Transparency Part I.  What is the President's argument that all of the above is legal?  Nothing.  He has made no argument at all.  In fact, he refuses to turn over the legal memos justifying any of it despite the demands of Congress.  This whole episode has a Nixonian, "if the president does it, then it's legal" stench to it.  At least Bush marched out that legal hack John Yoo to make a case for waterboarding.  Secrecy is a worrisome trend with this administration.

4. Lack of Transparency Part II. This Administration has declared war on whistleblowers like none other before it.  Obama dusted off the Espionage Act of 1917 to prosecute double the number of whistleblowers than ALL prior presidents combined.  It's ironic because during his inauguration speech he talked about having the most open and transparent Administration ever.  He has gone on to use this tactic to threaten and intimidate journalists who's job it is to look into government affairs.

Perhaps more concerning than those he prosecutes for whistle-blowing are the ones he doesn't prosecute.  Last I checked, Bradley Manning, of WikiLeaks fame, is still being tortured in some CIA black site and will be until he meets his demise without formal charges ever being filed.  The President can do that I hear because of the 2011 NDAA which authorizes indefinite detainment of citizens without judicial review.  When Obama signed it, he did so vehemently disagreeing with that provision in the NDAA, but from that moment has fought vigorously to hold onto that power.

I read an article in the Guardian about the worst civil liberty presidents in US history, and they did an interesting balancing test comparing the horrible actions taken, (for example Abraham Lincoln suspending habeas corpus rights for deserters and seditious elements in the population) with the justification used for those offenses.  In the Lincoln example, the entire nation was engulfed in an internal all-out war where half the country was fully devoted to the total destruction of the other half. The existence of the nation was in doubt and people were dying by the tens of thousands practically daily.

Obama's justification is the war on terror.  You have a better chance of getting struck by lightning than being killed by a terrorist.  The infringements on civil liberties are a delusional overreaction to the threat of terror.  Needless to say, Obama didn't score well in that article's view.  The fact that Obama argues it is lawful to be able to unilaterally snatch up a U.S. citizen and detain them forever with no trial or even charges is downright chilling.  Obama is no doubt a talented lawyer and it is dismaying to see him use that talent to be as big a creep as possible.

5. Lack of Transparency Part III. I'll make this one short.  The government is trying to pass a law where it is lawful for them to lie about the existence of records requested by the public under the Freedom of Information Act when in reality those records exist.

Long story short, I just can't overlook this stuff.  I must sound like a pro-life person that just can't get over the whole abortion thing despite agreeing with a candidate on 50 other things. Seriously though, look at this shit.  He is killing thousands of innocent people in a war-crime-like fashion while suppressing dissent in the most horrific ways possible.  Lesser evil is pretty damned evil.  Fuck Obama.  He is the reason that a "not Mitt Romney" vote for the Democrats isn't viable.  Such a low hurdle too.