A Lesson Learned the Hard Way

Let this be a lesson to all of us about what happens when you combine alcohol and overconfidence: 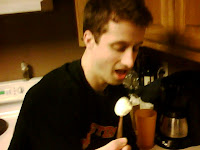 My idiot brother, co-captain of this very blog and sworn enemy of the White Menace, was so confident that the University of Akron would prevail over Ohio University in yesterday's MAC title game that he agreed, while under the influence of gin, to the terms of a bet* with his girlfriend Lauren that would require him to ingest a spoonful of mayonnaise in the event the Zips should lose.

Quite naturally, the Zips lost, and so did Jeff.  Of course the bet is immaterial when you consider what he really lost:

This scandal has already had widespread implications throughout the McBoniverse.  My brother's commitment to the anti-mayonnaise movement has rightly been called into question.  Some of you have demanded his immediate resignation.  Others want his head on a plate.  I say, let's not be so quick to judge.  Jeff, who has gone into hiding, understands the seriousness of this situation.  He also knows he has the aftermath of his betrayal to clean up.  A long road to redemption lies before him.  The journey begins when a contrite Jeff Bowler steps forward to face his loyal McBoners.

Let it be known that while a significant quantity of mayonnaise did in fact pass his lips, none was swallowed**, as his stomach immediately discharged a payload of 2 pounds of delicious barbecued pork ribs.

I would now like to take this opportunity to congratulate my alma mater for its rousing 81-75 overtime victory and advancement to the NCAA Tournament.  Go Bobcats!

*Had the Zips won, Lauren would have been required to eat a spoonful of anchovies.

**Alex has opined that this fact renders his punishment null and void and necessitates a redo.  However, because all betting parties were satisfied with the outcome, his debt is considered paid and no further action will be taken.
Posted by BillBow Baggins at 6:43 PM

Ummmm, I have bet on tape in which one McBoner said he would ingest mayonnaise if the Buckeyes lost to Purdue last year during football season... Need I remind that McBoner that he was not under the influence of anything but a good whisky and beer at the time?

Of course, he quickly took that bet back... then accepted then took it back again before settling on some yummy Venezuelan rum instead. I'm reaaaalllly hoping to have some of that rum in May when the Dawgs have rule of the roost. But based on how I haven't heard from said McBoner about a date for said event (or if he would like to see the Reds get pummeled by the Cubbies at Wrigley over the July 4th weekend), I'm beginning to wonder which McBoner is worse... The one that ingests mayo or the one that reneges on yummy rum?

Don't make me go Jake Delhomme on yo ass! Ahhhhhhh... Where's Bernie Kosar when you need him?!

VICTORY IS MINE!!!! GO BOBCATS!

Siege, I haven't reneged on anything! I can't just conjure rum from thin air! Unless you want Bacardi instead.