Paths of the Damned 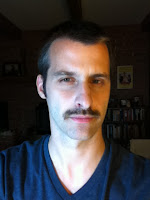 As promised, my moustache stopped by for a visit tonight.  He was weary from travel and thirsty as hell.  I poured him a double bourbon to cut the dust and we set straight to catching up.  He told me of the paths he's trod and the towns he's seen.  Seems like there was a lady or two along the way and a couple of hard knocks, too.  I could hardly blame him for nodding off for an hour, just long enough for me to whip up some biscuits and gravy--his favorite.  Well, we ate and talked and even chomped on a cigar for the better part of the night, and then, all of a sudden, it was time for him to go.  My moustache never lingers long in one place.  I asked if maybe he'd like to spend a couple days, get to know the McBonerito, but he just handed me his flask to fill and shook his head.  'Not my style,' he said, and, with a tip of the hat and a wink, he was gone.

Friends, as you travel the highways and byways, remember me to my moustache.  He'll be the lonesome drifter you see, collar turned against the rain, wandering the endless roads to nowhere. 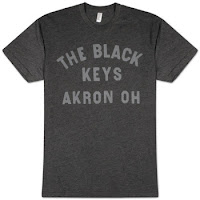 The Black Keys.  They're from West Akron.  We're from West Akron.  I'm happy for the guys, and I'm proud of their success.  While it's true I've got a small ongoing beef with one half of the duo, my respect for the Firestone High School grads grew exponentially after reading this, from their recent Rolling Stone cover story:

They had turned down a six-figure opportunity to use a song in a mayonnaise ad the year before.

The passage relates to their struggle to gain financial footing in the early years of their recording career.  As tempting as those dollars must have been, they knew mayonnaise has no place in Rock 'n' Roll.  Cheers to you, lads, for not losing your souls on the way to stardom.

I've never claimed to have deep reserves of that mysterious, mystical force called 'mojo.'  First of all, I'm about as white a white boy as you will find.  OK, maybe not Young Republican white, but I'm pretty goddam white, so that's one factor against me.  Also, I don't play guitar.  Unless your instrument is the triangle or you happen to be this guy, musicians generally have mojo to spare.

At one time, though, I did have a modicum of mojo.  You may counter that there is no such thing as 'blogger mojo,' but I disagree.  I have fun with this medium, and I daresay that Stabbone and McGraw has been better than the average blog (read: didn't quit writing it after 2 posts) since my idiot brother and I started this business back in 2007 with nothing but a dream, two laptops and a sizable grant from the NEA.  For five years McBone has kept my juices flowing.  You, gentle McBoners, have patiently indulged me.

Lately, though, you can hear the crickets chirp.  While it's true that I:

I cannot say that those are the only reasons why my work here has declined in quantity and quality.  Yes, time is in short supply, but these days just beginning a post seems a monumental task.  I'm not lacking in ideas, really, just steam.

I'm not given to depression, but this is depressing the hell out of me.

I could stop fretting and call it a day, I suppose.  After all, it's just a blog.  Roughly 0 people would notice if I up and quit.  But I don't want to stop writing this thing, and anyway that wouldn't help.  I need an outlet, so instead of bitching about the McBone's decline and fall, I'm going to try and find some energy.  I won't get back to 10-15 posts a month anytime soon, but what I can do is write a little every day.  I'd be fine with that.

So there you have it.  We're making a comeback of sorts.  Rising from the ashes.  I don't know how this initiative will affect my output, but 15-20 minutes a day of creative exercise will do wonders for my mental well being.

As ever, we remain committed to: