Profiles in Evil; The Living Brain 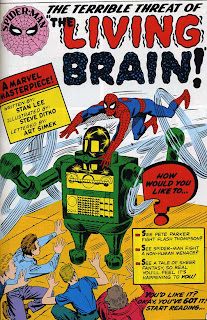 Robots.  Their uses are many, but they are a constant liability.  One tiny malfunction can hopelessly scramble the programming of even the best-intentioned machine.  A freak lightning strike, an errant splash of water, an acute blow to the mainframe and suddenly you don't have a robot on your hands; you have an out of control kill-bot.

No robot better illustrates this reality than Spider-Man's mortal enemy, the Living Brain.

Don't let the blocky green carapace fool you: the Living Brain is as high tech as it gets.  A miracle of robotic engineering, every circuit and tube was designed with one purpose in mind--to create the ultimate supercomputer, capable of calculating the answer to any question that our puny human minds can conjure.

But the Living Brain isn't merely the height of artificial intelligence, nor is it simply a one-dimensional yet potent sex machine.  Positioned atop two rollers, this robot is highly mobile, capable of traveling at speeds exceeding 8 miles per hour.  In a stroke of lunacy by its creator, Dr. Petty, the Living Brain was also fitted with a pair of powerful swiveling arms, each featuring a fingerless 'hand,' that bears a much closer resemblance to a wrecking ball.

When Dr. Petty decided the time was right to show off his masterwork, he choose the most logical place to demonstrate its virtually limitless potential--a high school science class.  After a brief demonstration of its capabilities, a pair of roustabout workers see opportunity knocking.  Naturally their designs to steal the Living Brain for their own lowlife pursuits at the racetrack lead to a disaster of near-catastrophic proportions.  When, in a scuffle with Dr. Petty, one of the degenerates jolts the computer's control panel, an inevitable short circuit ensues.  Suddenly, the Living Brain's super-advanced intelligence center is focused on a single objective: DESTROY!

Untethered by any sense of morality, the Living Brain rampages.  With arms gyrating and students in peril, there's only one hope to save Midtown High--Spider-Man, who, in a moment of supreme canniness, flips off the robot's power switch.  The Living Brain is subdued, but not before major structural damage to the school that will no doubt be billed to John Q. Taxpayer.  Dr. Petty, needless to say, is ruined.

So, let the near-tragedy of the Living Brain be a lesson to everyone. Terrible things tend to happen when we play god.  All robots have an evil side, and Spider-Man can't be everywhere at once.
Posted by BillBow Baggins at 9:56 PM

Fortunately the good Doctor had a backup career with the Heartbreakers.