Cleveland Cavaliers vs Golden State Warriors; a McBone Preview of the NBA Finals 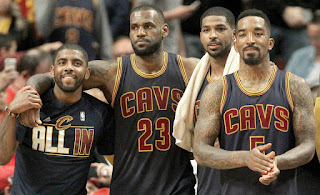 Hoping to give the Cleveland Cavaliers a little cosmic assist as they tear their way through the NBA playoffs, I've sworn off all beer on game days except that which is brewed by the Great Lakes Brewing Company. The strategy has paid off to the tune of a 12-2 record, with just 4 wins separating the Cavs from their first ring and Cleveland from its first title in 51 years. Only once did my vigilance slip: game 3 vs the Bulls, when I cracked open a Michigan-made Hefeweizen that tasted so vile that I knew only evil and defeat could follow. Indeed, my transgression did not go unnoticed by whatever energies rule the universe and dictate the outcomes of basketball games. A banked-in three pointer by Derrick Rose was at once a punishment and a warning against future infractions. My bad, Cleveland. That was unnecessary and it won't happen again.

To get an idea of the level of superstition I'm operating at right now: I was at our local organic store yesterday looking to stock up on some Great Lakes for the forthcoming championship series vs the Warriors of Golden State. Innocently enough, I selected a six-pack of Rye of the Tiger, but was seized by a sense of dread so immediate and overwhelming that I had to put that sixer down, leave the store at once and procure a different brew at an alternate locale. At the next stop, I quieted my mind, calmly surveyed the offerings and, spying a pack of Commodore Perry IPA that felt 'hot,' made my selection.

I am confident that the right beer is cooling in my fridge, and thus I am ready to break McBone's long silence with this preview of the Cavs' second appearance in the NBA Finals!

PG - Kyrie Irving v Steph Curry: Let me just put it out there: I already hate this Curry fucker, and I don't care if he was born in Akron. Hell, the cemeteries of Akron are filled with the remains of my enemies, so why should I give a damn about some kid playing ball in Oakland? Screw Steph Curry! If the Warriors win this series, it will be because the Cavs couldn't contain him and his eight million rainbow threes, and it will also be because Kyrie's knee and foot don't let him dominate the way he did in the regular season. This is the year Irving arrived, and there was a two-month stretch when he was destroying just about every great PG in the league. That said, there's no way he can defend Curry in his current state, and he won't likely be asked to. On the other end, KI must have his shot working and find a way to make the bastard sweat on defense. Advantage: Warriors, with the caveat that this would be a very even match-up if KI was healthy

SG - Iman Shumpert v Klay Thompson: Klay is another gunning SOB who can score a billion points in about two minutes, but he's going to have to do some of that scoring against one of the nastiest defenders I've ever seen in a Cavs uniform. Shumpert is everything that midseason castoff Dion Waiters is not: a guy who cares only about winning. Not touches, not points, not minutes, just winning, and he can be a Cav for life, as far as I'm concerned. Thompson is a tough defender in his own right, but if Shump can continue knocking down the open threes that have been there all postseason, he will keep the defense honest and open things up for our playmakers. Advantage: Warriors, but just barely

SF - LeBron James v Harrison Barnes: The best player in the league operating at the height of his powers against some guy named Barnes. For the Warriors to have any chance at winning this series, they will have to do a better job on LeBron than they did in their last meeting, when he went for 42-11-5-1-2 and they threw everyone at him, Barnes being the least effective. As for LeBron, he is peaking in terms of focus, mental toughness and hitting clutch shots. Advantage: Cavs

PF - Tristan Thompson v Draymond Green: This should be among the more entertaining matchups. Two high energy guys who never seem to take a play off. TT has a couple inches on Draymond, who probably will be spending a decent amount of time on LeBron. There was a time I thought that Chris Grant had made a tragic mistake drafting TT. After watching him make play after play after play this postseason, after seeing him block shots, make clutch baskets, and rebound the hell out of the ball, it turns out he was saving his best work for the games that matter most. Advantage: even

Bench - JR Smith, Matthew Dellavedova, James Jones v Shaun Livingston, Andre Iguodala, Festus Ezeli: One could make the argument that JR has been the second best Cav this postseason, and he did take his game to a new level against Atlanta with his 18 points annd 7.5 rebounds per game, suffocating defense and three pointers that were so contested they seemed impossible. Delly, along with Shump and JR, is one of the reasons the Cavs have neutralized the three pointer and made all stars like Rose and Teague look downright silly at times. Meanwhile, this Aussie kid Delly is too dumb to know he doesn't really belong in the league, and he's quickly turning himself into a cult icon in NE Ohio. You can book James Jones for a couple of huge three pointers at some point in the series. The rest can stay on the bench, unless there is some garbage time to be played or a hatchet man is needed in the form of Kendrick Perkins.

As for GS, Livingston is a perfect PG off the bench, and Iggy is going to give them a little of everything at the 2 and 3. What sucks for him is that he will have to guard LeBron, which he did not do well last time out. I can't help but be annoyed by a guy named Festus. Fuck him. I don't care about Mo Speights and David Lee. They aren't in the rotation. Advantage: Fuck it! Cavs, because JR fucking Smith

Coach - David Blatt v Steve Kerr: Both have done a stellar job in their first year coaching an NBA team. Kerr inherited a playoff-ready squad, however, and he has had the luxury of good health and little turbulence or turnover. David Blatt has been the one who was really tested this year, with a resting LeBron, a roster shakeup, injuries and rumors of his imminent midseason demise. The Cavs started the season 19-20. Since January 15, they have the best record in the NBA, including a 12-2 playoff run. Blatt has proven adaptable and capable of getting pieces to fit in a hurry. Advantage: Blatt

Prediction: This isn't the 2007 Cavs making the franchise's first trip to the finals playing an experienced and ruthless Spurs team. Now we have a fully formed LeBron James and a perfect complement of players who keep rising to the occasion. The Warriors are a good team. A very good team, but they are an inexperienced, jump shooting team playing on the world's biggest basketball stage for the first time. If Kevin Love hadn't been knocked out of the playoffs, I'd say Cavs in 5. Without Love, it will take one more game to put this Warriors team away: Cavs split in Oakland to open the series and win in 6.

This post is dedicated to our Uncle Al. I'd give anything to hear his own analysis of this series, or of anything going on in the world right now.
Posted by BillBow Baggins at 11:19 PM 0 comments