Every once in a while you just need to go for a run outside, in the middle of winter, in nothing but your undies.  Right?  Got your attention?  PERFECT!


In 2013 I am making a commitment to do more to help others in the community, and also get involved with programs that help people across the world.  The 2013 Cupid’s Undie Run is my first opportunity to do so.  Cupid’s Undie Run is a 1.5 mile run in nothing but your skivvies themed around the Valentine’s Day Holiday, and we have one taking place right here in Cleveland.  In Tremont to be exact.  This event is run across the world to help raise money for The Children's Tumor Foundation to help end a disease called Neurofibromatosis, commonly known as NF.  It is a cause that is near and dear to our hearts here at The Q.


100% of the funds raised through Cupid’s Undie Run go directly to The Children’s Tumor Foundation.  That is where you come in.  The Monsters have formed a team and our goal is to raise $5,000 to help research and find a cure for NF.  How can you get involved?


1.)    JOIN OUR TEAM AND RUN:  Simply CLICK HERE to register and join our team.  You will find us in the drop down menu of what team you would like to join.  Look for LAKE ERIE MONSTERS


a.       This is meant to be a fun race and yes most of us will be wearing nothing but our Undies!  But look, if you aren’t comfortable running in your underwear you can come up with another fun themed outfit to run in. The important thing is that we all come together and raise money for a great cause.  Be creative, have fun with this and push the envelope!


2.)    DONATE! Every dollar counts.  Any and all donations are welcome and we appreciate every donation, no matter how large or small.  Whatever you are willing to do to help us get to our goal, and help find a cure for this disease we will sincerely appreciate.  Of course, all donations are tax deductible.


CLICK HERE TO DONATE TO OUR TEAM:  MONSTERS TEAM PAGE


Lots more information on  NF and this run are available here: CupidsUndieRun and please check back to follow our progress and updated photos on our team page. If nothing else please feel free to come out the day of the to cheer on all the amazing people that are working hard to make this an incredible event.  There will be pre and post-race activities so come out and share some incredible memories all day long at all the wonderful establishments in Tremont.  And talk about an opportunity for some incredible photos!


The 2013 Cupid’s Undie Run.  A truly unique and amazing opportunity for us to provide support for so many children out there that need our help.  And if we can have fun and embarrass ourselves along the way, well even better! 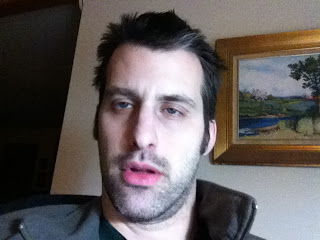 I wanted to start the blogging year on a motivational note.  Here's the thing: I like New Year's resolutions.  Even if they are 99% self-deluding nonsense, I enjoy seeing the calendar roll over and pushing the reset button while pronouncing a few probably non-starting self-improvement initiatives.  Winter is a grind, after all, and I don't see anything wrong with setting some goals that will never be reached as a way of braving the cold dark months ahead.  I wanted to blog something about how I was going to 'positively own 2013.'  'Destroy 2013.'  'Make mincemeat of 2013.'  I was going to talk about how 2012, the greatest year of my life, the year I got to know my son and revel in raising him with my sometimes-popular wife, would serve as a launching pad for an even more awesome 2013.

Then I threw up.

Boston, Massachusetts was the site of 2013's MLA Conference.  My wife was there for an undisclosed number of job interviews, possibly to determine where we'll spend the rest of our lives.  I was there for support.  While she was nailing her interviews, I watched over the McBonerito.  All was going well until the final night in our comfortable room in the Sheraton.

The nausea that woke me at around 2AM told me I was in for it.  Between intermittent spells of sleep, I suffered chills and aches.  Stomach flu, for certain.  I longed for a quick resolution, but was condemned to moan and roll in bed until dawn.  At last, 6 AM was the appointed hour.  The nausea now acute, I leap out of bed and hustled to the bathroom, just as my guts unleashed their fury.

One, two, three violent heaves sent a steak and bean burrito surging into the toilet.  I lingered a moment, regarding the frothy mix of beef and red legumes.  On the surface, browned cilantro leaves floated--little lily pads on a putrid pond from hell.

A final few hacks of yellow bile signaled the end.  After mopping up the spatter and brushing my teeth for an hour, I staggered back to bed.  I would spend the day in a diminished state, so weakened that every task was insurmountable.  My 14-month-old son easily overwhelmed me during a routine diaper change.  Were he of a more sinister nature, he could have taken my arm behind my back and made me cry "uncle."  But he's a good and reasonable lad, and he eventually consented to having his loins regirded.

After wrapping up some final Boston business that day, we hit the road.  At well past the stroke of 2 AM, 24 hours after the stomach fun began, we found ourselves crawling thankfully into our own bed.  The trip was overwhelmingly positive, but after having my ass handed to me by the flu and negotiating the long route from Boston to Chicago to West Lafayette, IN, I find myself humbled.  Perhaps further posts will see me 'taking 2013 by storm,' but for now I'll reflect on that semi-digested mess in the toilet and remember that a few microbes can topple even the mightiest of bloggers.

Oh, and I wanted to say goodbye to 2012 with a final birding list, so here's that: