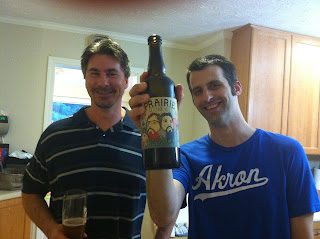 After drinking 'Merica Farmhouse Ale, crafted by the lunatic pair of Oklahoma brother-brewers at Prairie Artisan Ales, I felt changed.  Not because a sizable quantity of alcohol had splashed down into my empty gut.  No, this change was foundational.  The beer didn't just make me drunk; I was a different person after drinking it.  I don't know why, and I'm still trying unravel how.  Probably I'm a little more introspective now, and perhaps I've gained a more cynical view of the world.  On the other hand, drinking 'Merica felt something like a rite of passage--traumatic, yes, but edifying in the end. Only this is certain: I'll never quite be the same again.

Usually I try to write a review while in the act of drinking the beer.  This one required some time, distance and a chance to reflect.  Though weeks have passed, I remember the experience with total clarity, the same way I remember exactly where I was and what I doing the day Don Knotts died.  Am I ready to write this?  Let's say I'm as ready as I'll ever be.

A dinner invite to Jenny and Thomas's house would introduce me to a number of beers. Thomas suggested we start with the 'Merica.  He claimed never to have sampled it before, but it occurs to me now there was a twinkle in his eye as he spoke.  Then again, that may be the 'Merica thinking for me; you see, I'm less trusting these days.

The beer almost plopped rather than splashed into the glass.  What was left following the "pour" was an opaque orange-yellowish concoction, like an Indiana sun corrupted by the haze of a nuclear dawn. I was excited, but wary.

After a moderate white foam subsided, I sniffed what appeared to be the inside of an ancient cheese box, but one inhabited by a family of rodents.  Thomas, somehow unafraid, was the first to sip.  'That's pretty funky,' he commented.

To say the least.

Finding descriptors seems a futile gesture, but I will try to approximate the chaos that was unleashed in my mouth. Yes, there were some surface citrus and floral notes, but I don't give a damn about that.  Here's the important stuff:

My sometimes-popular wife has this to say: It was one of the most remarkable drinks I've ever had, in part because it started as one thing, but ended as something completely different.  Sort of like a movie that starts as a somewhat toothless romantic comedy and halfway through becomes a poetic zombie flick.

For my part, I'd say that 'Merica Farmhouse Ale is to beer what Finnegans Wake is to novels.  In fact, I should like to read Joyce's work paired with this befuddling ale.  Perhaps one would help unravel the secrets of the other.

This double rating is unprecedented, and perfectly reflects that night of agony and ecstasy.  Would I do it again?  In a second.  Would I recommend it?  Depends.  Are you ready to look your demons straight in the face?

Drink 'Merica at your own risk. 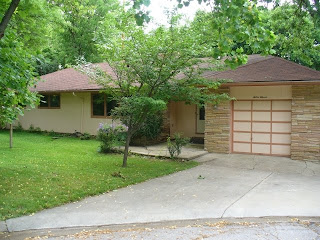 I'll miss many things about West Lafayette, Indiana, but none more than the house we occupied for nearly 5 years.  Though McBone Outpost #1211 at times seemed a mysterious, uncanny sort of place, a vast hall filled with shadows and unexplained refrigerator pins, mostly we'll remember it as a comfortable, messy, happy pink domicile where we worked hard, ate well and watched the McBonerito take his first steps.  That house is also where I started to really get interested in birding, and a combination of black oil seed, thistle, suet and nectar kept our yard singing and chirping throughout the year.  There was the occasional mishap, of course, and one very memorable near miss, and that host of flea-ridden miscreants to contend with, but the avian element was an overwhelmingly positive one. 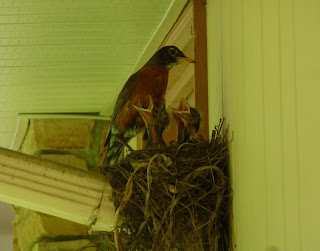 Hackish amateur though I remain, I was able to identify 55 of the species that took up occupancy on the grounds or merely swooped in for a bite.

As for Outpost #1353?  Considering we will only be feeding the hummingbirds, our new residence is working at a disadvantage.

But what the hell.

McBone Outpost #1211 has been shuttered. 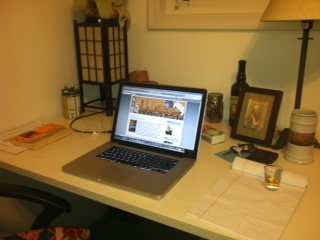 Things are churning.  Posts are forthcoming.  Tonight, though, I am sipping whiskey and listening to baseball.  The Indians are losing.  Again.  That is one of the many topics we will address in short order.

Issue 2 of Falling Rock Is Here!

Friends, today our genial postman had a treat in his daily delivery to McBone Outpost #1211.  Among the clutter of envelopes labeled 'Past Due' and 'Final Notice' was Issue 2 of Falling Rock National Park.  Yes, though our artist in residence and partner blogger Kid Shay has suspended his daily Falling Rock strip indefinitely, he has continued the adventures of Ernesto, Carver, Pam, Melissa and Ranger Dee in comic book form.  Let me tell you, the Kid has elevated his game to match the larger format, and as great as Issue 1 was, the second installment, filled with ghosts, confused shoe store managers and a jaw-dropping montage of a prairie dog habitat, will be an even tougher act to follow.

Now, don't think that just because I've read it once I'm going to hand over my copy.  The good news is that it's not too late to buy a subscription of your own!  And while you're shopping, you might want to pick up a collection or two of the Falling Rock daily.  No need to ask me which is the best; as something of a Falling Rock connoisseur, I recommend them all.