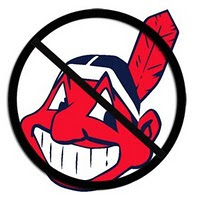 McBone first denounced the Cleveland Indians' racist logo, Chief Wahoo, a couple of years ago.  I took that post and submitted it to the Akron Beacon Journal and Cleveland Plain Dealer and asked them to consider publishing it in their respective sports pages.  I was very courteously and roundly rejected.

No matter.  Figuring the article would reach hundreds of thousands of McBone readers anyway, I let it go.

But, dammit it, every time I see that god awful thing, it bothers me.  I root for the team, but always with the hope that they will soon rid the franchise of its despicable mascot.

Yesterday I took my concern to that haven of tolerance and progressive thought and good grammar, Facebook.  I casually remarked on an Indians fan page that I was, 'so sick of looking at that racist Chief Wahoo logo.'  Here are some of the responses I got:

-too bad nathaniel....deal with it..better yet go harrass the atlanta braves or maybe the chicago blackhawks....effin cry baby liberal


-I love Chief Wahoo, you effing creep. When I walk to the stadium past the protesters I finger that love right in their faces.

-I love Chief Wahoo,too!! I only buy Indians merchandise that has Wahoo on it. Political correctness and libs, with their cries of racism, are ruining this country!

-Chief Wahoo is NOT a racist logo. He is a happy, friendly face. What is so racist about that? Those of you that want to bring your extremist politics into baseball should get a life!!

-Am I the only one noticing that Dolan is slowly phasing out Chief Wahoo? First, he got smaller on the hats. Then he was not included on the alternate jerseys or hats, except on the sleeve, next hes off the spring training hats. Finally the other day, i got a Tribe Schedule and he is NOWHERE on it. My opinion of Dolan sinks with each waking moment. Chief Wahoo is nothing more than a cartoon character, no different from Ziggy. And I am a proud LIBERAL

-Same thing here in DC...every couple years someone cries about the Redskins logo.

-Nathaniel, you think Chief Wahoo is racist, but you support Gay marriages? How sick are YOU? What an a-hole!

-Nathaniel, there are real problems in this country. Go fight for a cause that matters.

-What the hell are you doing here in the first place ??

-Gouge your eyes out, plug your ears, sit on your hands, and stop whining.
An American soldier died so that you could have the right to your opinion.
But, if something else is bothering you... don't let the door hit you in the ass, leave the country, see what happens when you bitch elsewhere


-I love Chief Wahoo too, and I'm tired of hearing about it. If anything, Chief Wahoo is a boost to the Indian race. They even got the national spotlight in 2 movies. How many of these jerks were complaining when the Tribe was winning? I say, GET A LIFE!! and.... GO TRIBE!!!!!!

I was expecting some hostility, but not such uniform hostility.  The one that really gets me is the LIBERAL guy.  He's basically saying, 'I'm a liberal and therefore have the moral high ground and if I say Chief Wahoo is ok, then he must be ok.'  The rest is pretty much par for the course on an internet comment page.

It was probably petty of me to toss a political remark into a baseball forum, but more and more I have a hard time ignoring this, and wanted to test the northeast Ohio waters a little.  Every year native people gather for opening day at Progressive Field to protest a mascot they find offensive to their culture and history.  Every year they are ridiculed and mocked by passers-by.  Call me an effing, bleeding-heart, tree-hugging, gay-marriage-supporting liberal if you want, but I believe that when something is offensive to one ethnic group, we should all be offended.  If any of you McBoners out there are with me and think that a race of people who were essentially wiped out by disease and violence deserve better than a grinning, idiotic, red-faced cartoon, I invite you to join the Facebook group I started.

nwb
Posted by BillBow Baggins at 9:46 AM

1. It is your extremist, liberal views and not eight years of devastating misguided leadership that has ruined this country.
2. Nothing is more personal and powerful than canned commentary like "A soldier died today so that you can be an asshole." It's doubly cool because a native American died 200 years ago so that person could sit on their probably obese ass and type insults to you in the comfort of his snuggy.
3. You're going to get Kid Shay all in a huff because you mentioned Ziggy.
4. The really insane part about this whole think is that you are on the evil entity facebook.

1. I'd drive up there and kick you a** for saying that, but I'm trying to reduce my carbon footprint.
2. Did you not read about the Cavs' snuggy giveaway? Why do you hate snuggies, and, by extension, America?
3. Sorry about that, Kid Shay!
4. You got me there. Touche.