In Heaven, Washington and Lincoln are Gay Lovers

Though few know it, and even fewer will accept it, former presidents George Washington and Abraham Lincoln are gay lovers in heaven, as this portrait clearly demonstrates. 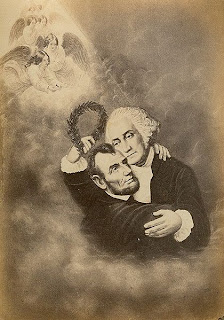 Notice the starry eyes of Washington as he cradles Lincoln in a tender embrace. And Lincoln, with anticipation written into the lines of his craggy, bearded face, submits to Washington while gazing into the celestial expanse. The expert rendering by the artist shows that the words presidential and totally gay are no longer mutually exclusive, at least not in the promised land. The loofah in the right hand of Washington suggests an impending bubble bath. In the background, the angelic, lesbian forms of Martha Washington and Mary Todd Lincoln look on approvingly.

If that is wrong, then I don't know what is right.

Seriously, where did you dig that up?