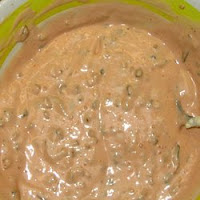 I recall an event from my youth, in the early days of my restaurant-going, that no doubt will mark me until my dying day. I must have been nine or ten at the time, and the establishment was an Akron institution--Gus' Chalet, a Greek-themed chophouse my family frequented.

Even at that young age, food was becoming exciting for me. While I might not have been fearless yet in the dishes I was willing to try, I was at least expanding my horizons a little. Seafood was still out, and I was a long, long way from the realm of organ meats, but if the cuisine sounded reasonably appealing, I would generally give it a shot.

Then one dark night at Gus', I was asked what kind of dressing I might like on my salad. Innocent enough, that question, and the options, looking back, were predictable: Italian, French, bleu cheese, ranch, honey mustard, raspberry vinaigrette...

And of course thousand island.

My answer was almost automatic. Italian, I wanted to say, but I checked myself. Perhaps something different today. Thousand island sounded interesting. Exotic even, as though it came from some place far, far away, where the sun was always shining and women danced in grass skirts. Where were these Thousand islands, anyway? The South Pacific? The Caribbean? I had to unlock the mystery, and so I smiled at our waitress:

I sipped my Shirley Temple and sat back, giddy, and not a little proud of myself. Then the doubts began to creep in. What if I don't like it? What if it's slimy? What if there's something funny in it? Suddenly, I had to know.

What's thousand island? I asked my mother, but she was busy with a pile of sauerkraut balls. I turned to Dad, but he only sipped his martini and gave me that look that said, don't bother me now, kid.

I started to squirm and desperately sought our waitress, Barb, I think her name was. She had been so nice and patient in repeating the specials twice for mom, even with Dad sighing and conspicuously checking his watch. Barb would tell me, but she was nowhere in sight. Quickly I excused myself to the bathroom, where I splashed cold water on my face. Get ahold of yourself, Nate. It's just a salad. Lettuce. A few tomatoes. Cucumber. You don't have to eat the radish. How bad could a dressing be? I took a long look in the mirror, snatched the comb from the jar of blue fluid and flattened my cowlicks. Calmly, I returned to the table, where Dad was hollering for another martini, this one with some ice in it, for Christ's sake.

Mom, picking a shred of kraut from her teeth, flashed a smile as I took my seat. Hungry? she asked, to which I giggled some bit of nervous blather. Our waitress approached, setting our salads down one by one. Italian for Dad, bleu cheese for Mom, ranch on the side for my brother.

And then I beheld my own.

My first reaction was: who got sick all over my salad? For my greens swam in a pale sea of pink. Were all these little green chunks the thousand "islands" they spoke of?

Is this my salad? I asked, praying a mistake had been made.

I nodded and raised my empty glass. I'm going to need another one of these.

The others tucked in and were nearly done before they noticed my reluctance.

What's the matter? asked mom with a full mouth, a mist of bleu cheese coating my face.

I haven't tried it.

Well, why the hell not? said Dad, eyes blazing, ordering more than inquiring. I picked up my fork and stabbed a few leaves of iceberg, one question burning in my mind.

Oh, for Christ's sake! said Dad. I swear, if you make me miss the kickoff--

No honey, smiled Mom, attempting to buffer my father's growing impatience. Of course not.

Dad pounded the table. It's dressing, kid! Just eat it!

Try it, sweetie, winked Mom. Your father's right. It's dressing. It can't hurt you.

Well, I was cornered on this night. Doomed. Dad's glowering eyes said it all: By god, boy, I'm paying for that salad....

Today, at the age of 32, I am less innocent. I have long been aware of what thousand island dressing is: some psychopath's mix of ketchup, mayonnaise and pickle relish. Recipes vary as recipes will, but the core ingredients do not. Exotic? Hardly, and together they blend into something with roughly the color and appeal of months-old salmon.

Needless to say I tasted my salad, and needless to say, quite a scene ensued, or so I'm told. Slapped back to consciousness by Gus himself, I lifted my head to find Mom fanning me with her napkin, mascara streaking her cheeks, the same bit of sauerkraut lodged in her teeth. Thousand island dressing coated much of the non-smoking section. Behind Mom paced Dad, martini in hand and murder in his eyes.

Five years went by before I entered another restaurant. Though Mom and I have had our laughs about that night, I still haven't shaken the monikers that Dad has since preferred, little sissy and girly-boy being the least injurious of them.

But I don't hold a thing against my folks, in spite of what my therapist tells me, because I know it's my fault. My fault for being weak, like Dad says, a spineless mommy's boy and a destined loser.

Posted by BillBow Baggins at 4:49 PM

Any poli-sci student worth his salt will tell you that 1,000 Island represents the tide of Imperialism that swept our fair nation from the late 1800's through World War II. Here, ketchup represents democracy, which represents freedom. Mayo represents oppression, which represents communism or a dictator not willing to toe the American line.

Mixing the two together (with the pickle relish thrown in for texture) is a subversive act. It shows that neither side can claim victory as long as the other survives. (This is also a lesson the young Harry Potter must learn.)

Originally meant not as food but as something to throw at politicians who had fallen out of favor with the public, 1,000 Island was only deemed edible when the Great Depression made it necessary to eat anything not capable of running faster than people. FDR, in many of his beloved fireside chats, called the people of the nation to "eat what has not been eaten, drink what has never been drunk." Mayonnaise was therefore ushered in under the guise of a fancy dressing as a way to supplement one's meager diet.

My god, I never knew how politically charged a condiment could be. How blind I've been.

Thank you, Kid Shay, for your tireless efforts in the war against mayonnism, AKA World War V.

Those neocons who drown their freedom fries in thousand island...I wonder if they know the real implications of their actions?

How in the hell did I miss World War IV...what was that Russian vs. Peppercorn Ranch?

World War IV was, and is, Coke vs. Pepsi.

years ago I would've picked Coke on hot hot summer days in Vermont (they came in glass bottles then), but in Mass it was Pepsi in all the restaurants, vending machines & sub shops. McDonald's was the lone exception.

Knowing now that either of them are the equivalent of battery acid in the stomach, I'm lucky to even be alive.

ps: You'll be happy to know that "Nate" has officially been added to the running for first & middle boy names. Haven't decided yet if we should have an award ceremony with gift bags & whatnot.

"Nate," eh??? A most excellent choice. I have long suggested the name as possibility for newborns, regardless of sex.

That idea gets an official McBone Seal of Approval.