What the Hell, Why not Gravel? 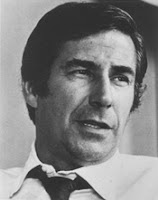 Is anyone else sick of this shit? How have we gotten to this point? How did the U.S. become a nation run by corporations, churches and homophobic, dogmatic, warmongering politicians? Why are politicians having to scare people into voting for them? How did these neocons manage to trick people in Nebraska into being afraid of Muslims? And did last year's shift in power really constitute a real shift? Is there any difference between the two parties anymore? Let's see who the democrats are trotting out this time. Right, I get it: on the surface, they seem to be a refreshing batch. A woman, a relative upstart from the south, and that rare black man without the title "reverend" attached to his name.

Would it be cool to have a black president? Sure, if he's a good black president. I want to root for Barack Obama, is the thing. But listen to him. Doesn't he sound like just another glossy politician? Actually he sounds almost like a hypnotist after listening to George Bush struggle with subject-verb agreement for 6 years. Where does he stand? people ask. Well, read his goddam website. He stands pretty close to the center (although I salute the recent tongue lashing he gave Detroit automakers). And Hillary? Christ! She voted for the war! And can't we spend just one presidential term without a Bush or Clinton in office? John Edwards? Already seems like a retread, doesn't he? He also voted for the war. Joe Biden? Voted for the war. Chris Dodd? Voted for the war.

There is a maddening tendency for candidates who stray away from the center to be instantly labeled an eccentric or a wacko. People treat Dennis Kucinich like he's some sort of circus attraction, as if his sole purpose in politics is to amuse us. Does anyone actually pay attention to this man? To me he seems about as eccentric as a jug of milk. He supports gay marriage? WOW! Only some sort of wingnut would want these sexual deviants to have equal rights. He wants to clean up the environment? Well what kind of wack-a-doodle-do would want to breathe clean air and drink uncontaminated water and make sure the earth remains inhabitable? Then there is my new favorite: Mike Gravel. I cannot claim to have been aware of this man until a couple of months ago, when I was reviewing the list of Democratic candidates. Even then, when I read it was his goal to empower the public, I gave him little thought. No name recognition. No chance to win.

Mike Gravel has no chance to win. Is this why he is able to speak his mind? Of course. He is the bizarro candidate who truly wants to empower be influenced by the U.S. citizenry. Yes, he got a little riled at the debates a couple of weeks ago. Good! Thank god. Who wouldn't be riled? I've been riled for the past 6 years, waiting for my outrage (I sure as hell am not the only one) to be represented in our government. Show me some real outrage, because that is what is needed in times like this, when we have a mass-murderering dumbass oil baron zealot running the show. Check out the video below (I know I'm a bit tardy), and then check out Mike Gravel's website. He and Kucinich are the only candidates who stand adequately left of center for my taste.
Do you like what you read about Mike Gravel? Do you think an active lawmaking citizenry is a good idea? Think getting rid of the electoral college, in light of who won the majority vote in 2000, is a really, really good idea? Well, take a look at the website for the National Initiative for Democracy.

Voting for John Kerry in '04 felt like an act of desperation. It just seems so inevitable that it will happen again. I still wish Al Gore would enter the race. This angry message felt good to write, thank you.
nb

The NOML fully supports candidate Mike Gravel, but regrets that he shaved off his moustache.
Posted by BillBow Baggins at 8:55 AM