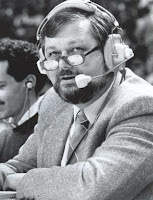 Last night the legendary Joe Tait broadcasted his 3,000th game for the Cleveland Cavaliers, what was ultimately an agonizing, last-second defeat at the hands of the New Orleans Hornets. How apropos. After 35 years of doing play-by-play for largely horrific basketball and baseball teams (Tait also worked the booth for the Cleveland Indians for 16 losing years), Tait has arguably witnessed more ineptitude in professional sports than any commentator in history.

My earliest memories of Cleveland sports are of Indians TV broadcasts in the '80s and Tait describing myriad 8-2 losses. So what got me hooked? Clearly it wasn't the baseball.

Of course there have been some glimmers of light along the way, like a 2007 trip to the NBA finals. Listen to Joe go nuts during the Cavs' playoff upset of the Washington Bullets in 1976, known in Ohio forever as the Miracle of Richfield:

McBone salutes you, Joe, not only for your loyalty, but your uncanny knack for making crap teams exciting. May you be rewarded in the twilight of your career with a Cavaliers championship.

that is amazing...gave me chills watching that

So glad you liked. Who are you?

The Cavs have to bring back those ole' uniforms, Nate.

Haha. They wore them on opening night and were crushed by Dallas. I think they've been permanently retired.

Tom Hamilton is by far the greatest announcer in Cleveland...

Tom Hamilton is the best now, but of all time? Joe Tait.