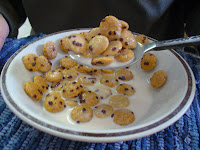 Growing up, our mother did her best to assure we ate a healthy, well-balanced diet.  That crusade started each day at breakfast.  Cold cereal was the popular choice, and our cupboard was usually stocked with a wealth of nutritious options.  Wheaties, Corn Flakes, Rice Krispies, Grape Nuts, Chex and Cheerios were staples.  There may have been the odd box of Frosted Mini-Wheats or Life to satisfy the sweet tooth, but we were far more likely to find a stash of Special K, Product 19 or, to our chagrin, Cracklin' Oat Bran.

Hey, I get it.  Our old lady was trying to get the vitamins in and keep the sugar out.  We didn't mind.  Hell, we loved our cereal.  So much that we typically ate a bowl or two for breakfast and another right before bed.  We loved it, yes, but that doesn't mean we were entirely satisfied with our selection, not when Saturday morning commercials, those seductive little mini-cartoons, told us there were other kinds of cereals out there.  In those ingenious adverts, lovable characters acted out their cereal dramas, all the while telling us how deliciously sweet breakfast could be.  Nutritious too, an integral part of 'this complete breakfast,' as a matter of fact. 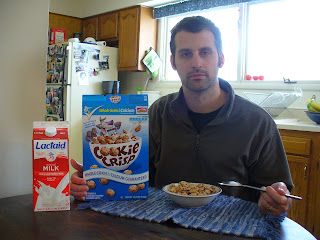 And if these colorful concoctions seemed too good to be true, that's because they were.  Indeed no amount of begging could secure us a box of Cocoa Puffs.  Count Chocula, Frankenberry, Boo Berry and Fruity Yummy Mummy were treats other kids got.  The embargo on sugary cereals meant no Trix, no Cap'n Crunch, no Lucky Charms.  Even when the manufacturers, so clever, dropped the word 'Sugar' from Sugar Frosted Flakes, our mother wasn't fooled.  If the number one ingredient was sugar, the box stayed in the store. 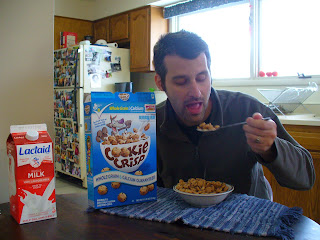 Well, that was the stuff of decades ago, and you know what, Mom?  You don't boss me anymore.  I can smoke, drink and eat myself into an early grave if I want to, or at least into a diabetic coma.  So this morning, giddy with the knowledge that, at age 35, I was free to select any goddam cereal I wanted, I prowled the aisle of the local Kroger.  My goal: pick the cereal Mom would be least likely to buy and blog the fuck out of it.  Many of the old tried and trues were there: Golden Crisp, Honeycomb, Corn Pops.  There were some new ones too: Reese's Puffs, Smorz, Cinnabon.  These last three seemed especially promising.  Figuring I was on the right track with the dessert-for-breakfast theme, I picked out one I had long coveted but have no recollection of ever tasting.

Perfect!  What could be more contrary to the idea of starting the day off right than eating chocolate chip cookies for breakfast?  Although disappointed that the Cookie Crook and Officer Crumb had been replaced by some sort of ravenous wolf named Chip (he's a lefty), I grabbed a box and a quart of lactose-free milk and burned rubber back home. 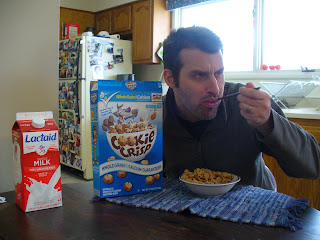 As ever, I like to begin these little eating adventures by reading about what I'm about to ingest.  General Mills advertises its 'naturally & artificially flavored sweetened cereal' as being 'Whole Grain & Calcium Guaranteed' not once but twice on the front panel.  'Nutrition Highlights' include zero trans fats, 100 mg of calcium and 40 iu of vitamin D.  Already convinced I was about to do my body a world of good, I turned to the ingredients:

For the hell of it, why not compare that formidable list to what you'd find in a batch of regular old Toll House chocolate chip cookies?:

Enough!  Breakfast time, so let's eat.  I admit to being mildly surprised by what I shook out of the package.  Perhaps I was expecting a pile of Chips Ahoy! to tumble into my bowl, but this Cookie Crisp looked shockingly like...cereal.  These tiny discs dotted with ersatz chips were cookies in name only.  I'll tell you that the smell, a heavy waft of corn sweeteners, in no way recalled anything I've ever smelled baking in an oven.

Feeling gypped (and an ominous sense of doom), I poured the milk and dove into my first bowl of Cookie Crisp.

I don't know about the whole grain and calcium stuff, but they sure got 'sweetened' right, especially the 'artificially' part.  As far as resembling a batch of Toll House, or even a box of Famous Amos, forget it.  You're as likely to find Apple Jacks growing in an orchard as you are to mistake this cereal for something Grandma whipped up.  No amount of added flavor could bridge the infinite gap between corn cereal and chocolate chip cookie.  The only thing at all chocolately to be found is a faint cocoa taste that takes me back to the days when I would spoon out the Nestle Quik in an effort to transform ordinary Rice Krispies into its more appealing Cocoa version.  Truly, this is an awful, awful food.  So bad that I managed a mere two bowls before calling it a day. 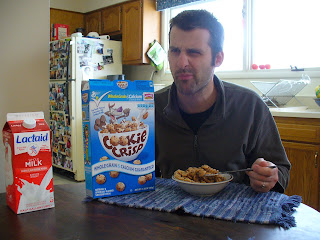 Yet, as sickening as was the taste, I was in no way prepared to what Cookie Crisp would do to my body.  I am confident that eating a couple of real chocolate chip cookies would be a better option than a daily bowl of Cookie Crisp.  I'm no paragon of health and fitness, but neither am I accustomed to a barrage of cheap sweeteners.  I noticed the effects only moments into the 40 minute walk we embarked on following breakfast.  Alex, fueled by eggs, toast and orange juice, took to the trail with zeal.  I, meanwhile, feeling mildly fatigued, nearly succumbed as the sugar bomb detonated.  Extreme lethargy in my limbs was at odds with the frantic racing of my heart.  Certain I would never make it home, paranoia set in.  Also hallucinations.  Wolves surrounded me on all sides.  Hungry wolves lusting for fake cookies.  Sniffing the cache in my digestive tract, they howled.  I ran.  Darkness took me.

Well, I woke up, guts intact, on the stoop of our back door.  I'm not sure how I got there and god knows where I got this tattoo, but I guess I'll count myself lucky to be alive.  I can't say I'd recommend Cookie Crisp to anyone, let alone a growing child, so I reckon I'll go ahead and add it to the McBone List of Boycotted Substances and say thanks, Mom, for doing right by us kids.

nwb
Posted by BillBow Baggins at 1:24 AM

Hilarious! Where can I buy a copy of your book and when will you write another? I see a Pulitzer in your future!

Thanks Suzanne! Be sure to catch my expose on Waffle Crisp.

This is why my dad always bought YOU Golden Grahams at our house.

Yes, it seemed like your house was a veritable warehouse of Bowler contraband: Golden Grahams, Fritos, Oreos, among many others.

one of your best posts by far. beats being forced to swallow a table spoon of honey every morning and a salmon fish oil pill. lol

Thankee! Uh, the honey sounds ok. The salmon bit, not so much.