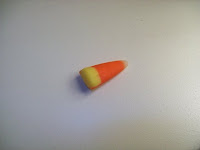 Obviously we at McBone spend a disproportionate amount of time railing against the evils of mayonnaise, and rightly so. Perhaps though in our rather single-minded quest we lose sight of the fact that mayonnaise is just one of the "foods" that have found their way onto our boycotted substances list.

With Halloween drawing near and Thanksgiving on the horizon, this seems an opportune time to discuss candy corn. Fortunately for research purposes, my wife annually buys a bag of candy corn, which invariably ends up in a cupboard mostly uneaten and utterly forgotten until about July, when we throw the bag away. This year she has procured a bag of Brach's, which proudly calls itself 'America's #1 Candy Corn.' Also conspicuous is a purple label featuring a beehive and a buzzing bee surrounded by the words: 'Made with Real Honey.' Real honey? That's not a bad place to start, and so perhaps it behooves us to examine the ingredients a bit closer. They read: sugar, corn syrup, salt, honey, gelatin, confectioner's glaze, dextrose, artificial flavor, titanium dioxide color, yellow 6, yellow 5, red 3, blue 1. Personally, I try never to leave titanium dioxide color out of a recipe.

OK, truth be told, I've seen longer and more horrifying lists of ingredients. This candy corn will never be mistaken for something all-natural, but mostly we're talking about loads of sweeteners. Oh, and let's not forget about the honey, which thus far is the only draw I can think of. Because, let's face it, what is the lure of something called 'candy corn?' Corn that's been candied? Yuck! And just look at the stuff. Does candy corn really look like anything to eat? It's tri-colored, yes, but how appetizing is white, orange and yellow? The colors are evocative of fall, I suppose, and pumpkins and, yes, corn, but more than anything, when I see a piece of candy corn, I think of the awful cupcakes that moms made for the Halloween party every year at King Elementary. Orange frosted cupcakes that invariably had a single candy corn rising from the center, like a candle. By the time it made it to us kids, the candy corn had leached some of its color into the cupcake, and really even thinking about it is causing my teeth to decay.

And speaking of candles, candy corn is also cone shaped and waxy to the touch, not unlike a miniature candle. While most candy corns contain carnauba wax, Brach's achieves waxiness without the need for the carnauba palm derivitive. Of course wax and candles, even tri-colored ones, don't exactly make my stomach growl. But I enjoy many foods that may not look too appealing, so I'll move to the next phase.

I stick my nose in the bag, half-expecting to be enticed by the smell of honey. Instead, an artificial, sort of sickening, prefabricated sweetness parks itself in my nasal cavity. I gag but am undaunted. I pour a small amount onto the table and hear the little corns click-clacking like a pile of Legos. Again I inhale. Lurking beneath all that sugar is something plastic, as if the candy has absorbed the scent of its packaging and the machines that made it. This stuff is so manufactured that any semblance to real food has been processed into oblivion. I recognize other unfoodlike aromas too. Silly putty. Polyurethane. Legos.

The last thing I want is to put one of these things in my mouth, but as a service to you, dear McBoners, I will. At first I taste nothing. The sensation truly is like having something plastic in my mouth. Then, I chew. As my teeth and saliva work hard, too hard, to break down the sugars, an unmistakable candy-corn flavor is released. My first reaction is: where's the honey? And if there is any real honey, I wonder why they bother, because I sure don't taste it. Corn syrup, among the cheapest of all sweeteners, is closer to the mark, and why not? It is candy corn, after all. During this assault on my erstwhile cavity-free molars, I find little to recommend it. To be fair, though, I will attempt to discern with some attention to detail a few of candy corn's characteristics. Plastic is certainly the predominant flavor. Also present are staleness (18-24 months), wax, artificiality, and processed (is 'processed' a flavor?). What about the texture? Again, plastic and wax, these followed by grit--grittiness being one of the truly unpleasant mouthfeels I can think of. Against every impulse, every survival instinct, I swallow. Let my stomach acid try and deal with this stuff now.

After a mere three pieces I feel a strong urge to brush my teeth for an hour. The ordeal should be over, but lingering on my tongue is something truly unnatural, almost unholy--kind of like the aftertaste of a diet cola. My mouth is not happy, and may not be for weeks; it demands fluoride and floss.

In conclusion, I want to make one thing clear: candy corn is not mayonnaise. While undeniably and almost ineffably awful, candy corn has few of the truly menacing qualities that have made mayonnaise McBone enemy #1. Still, McBone strongly urges you to avoid candy corn this holiday season, whether Brach's or any other brand of this sham of a candy. If you're desperate for something sweet, I think you'll find a spoonful of actual honey much more satisfactory.

A spoonful of raw honey is delicious.

Don't tell me you never tried to eat a Lego.

dear cousin - while i applaud your effort to unmask the treachery of the candy corn industry, i caution you to keep a wary eye on the fluoride that you think will protect you from the ill effects of that ultra-sweet confection. as i understand it, fluoride is a waste product of the nuclear and aluminum industries, which was converted into a "useful product" by an unprincipled capitalist mindset and the hoodwinking of the FDA. the trickery converted a liability into a revenue stream - literally - as it was soon being pumped into our water supplies. fluoride causes cancer and mental disorders, shortens life span, and makes people stupid, docile and subservient. hitler is said to have used it for the latter purposes in his concentration camps. floss on, dear cousin, but keep away from fluoride. -abby

Whoa, Abbs. My world just crumbled around me. As you are my hero, I will mind your words. Fluoride be damned.

And yes, Falling Rock, I have indeed tried to eat a Lego. Just last week I passed one that I had eaten when I was four.

Maybe. I don't touch marshmallows, either.